Halifax, one of the fastest growing Canadian cities, has a lot at stake today to keep things moving forward. And the Canadian city is leaving no stone unturned to eive that.

The growing volume of container business in Halifax is giving a boost to the economy of Nova Scotia. But there are some apprehensions about the port’s ability to handle large scale trade operations.

Halifax recorded a sharp growth in the first half of 2017 and ranked on top of all major ports in Canada. A staggering 16.7% increase in container volume was recorded compared to last year, amounting to approximately 274,650 TEU.

Halifax featured in North America’s Top 25 Ports last year as the fastest growing. It secured a north-south service and two trans-Pacific services since then. The overall growth in container business volume in Canada is 15% as revealed by Jack Mahoney, president of Maersk Line Canada.

The largest ever container vessel docked at Halifax port in June. It is capable to transport over 10,000 containers. The humongous ship Zim Antwerp used the Halterm container terminal located at the south end of Halifax. Many large ships benefitted from the Panama Canal expansion. The spike in container traffic made Halifax one of the fastest growing ports on the East Coast.

The port of Halifax does not require any dredging as it is deep water, ice-free port. This makes it capable of transporting cargo to the markets of the US and Canada in a quick and efficient manner. But there are some issues like inadequate road and rail network that hampers the transportation of goods to the central US and Canada in a timely manner.

There are some plans to tackle the situation. One strategy is to transfer all container loading and unloading to Imperial Oil refinery across the harbor. But this will add a considerable volume of rail and road traffic towards downtown Dartmouth. The additional movement of trucks on the ever congested Highway 111 is going to make the situation worse. Interestingly, the highway is called the Circumferential Highway.

Another plan hovers around including the Ceres terminal operation by expanding the current Halterm facility to Point Pleasant Park. Whichever plan is adopted, the expenses are going to be high for Halifax Port Corp., the federal crown corporation and could run into billions.

The Cape Breton municipality also has its own strategy which involves setting up a container terminal located in Point Edward area to distribute the container business of Halifax. Situated across the Sydney harbor, the port requires dredging and it is not ice-free. There are talks of another container terminal at Nova Scotia that could be developed in Guysborough County at Melford.

Only time will tell which plans are adopted but the container business in Halifax is going through good times. 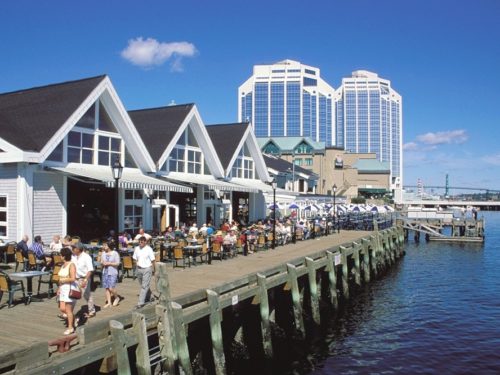 What is happening in the city: latest news round-up

Where to get help with a gambling addiction in Halifax?

Beauty is around us